Prince Pratap Sinh Serfoji RajeBhosle is the 6th descendent of King Serfoji ll.King Venkoji alias Maharajah Ekoji was the founder of maratha rule in Thanjavur in 1676 A.D. He was the half brother of Chatrapati Shivaji Maharaj,born to King Shahaji and queen TukaBai in Bangalore.

Prince Pratap, a 28-year-old engineer turned entrepreneur, is the author of four books. He created and manages a Facebook page, an Instagram page, and a blog to bring awareness to the heritage monuments and history of Thanjavur amongst youngsters and historians. He launched a website for his family museum and the Indian Postal Department's "My Stamps" to commemorate King Serfoji ll's 239th birth anniversary. He has even organised a Bharatanatyam dance festival online to commemorate King Serfoji ll's birthday. Furthermore, he has been featured in more than thirty newspapers. Five hundred plus copies of his second book, titled "Contributions of Thanjavur Maratha Kings—2nd edition," have been sold to date. He has been nominated for the MePadvidhar award 2019, Pune for the literature category, and the Heroes of Chennai award 2018, Chennai for the arts and culture category. His fourth book, titled "Rare Prints-a tribute to Thanjavur Maharaja Serfoji's Sarasvati Mahal Library", received a foreword from Shri Devendra Fadnavis, former chief minister of Maharashtra, and a message from Shri Bhagat Singh Koshyari, honourable Governor of Maharashtra. Currently, he is in the electronics business and pursuing an MBA. He is an honorary member of Rotary India.


Prince Pratap Sinh Serfoji RajeBhosle alias Rana, son of H.H Prince Serfoji Rajah Bhosle (elder son of H.H Prince Tulajendra Rajah Bhosle) of Sadar Mahal Palace,Thanjavur born on 19th November 1993 had completed B.Tech (Electronics and Communication Engineering) in Chennai,Tamilnadu. He is like his grandfather and father, has interest in doing research on Thanjavur Maratha dynasty and also to collect rare antiques like coins, vintage photographs related to his hometown etc. He has flair knowledge of history of Marathas of Thanjavur. 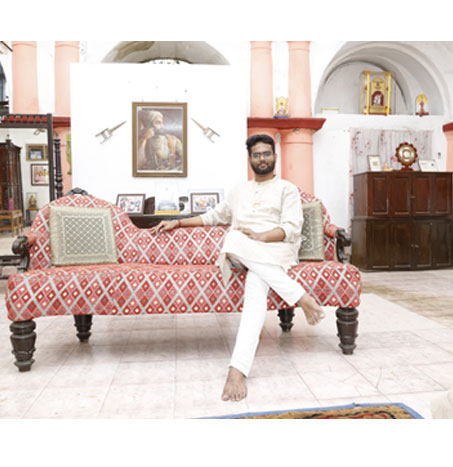 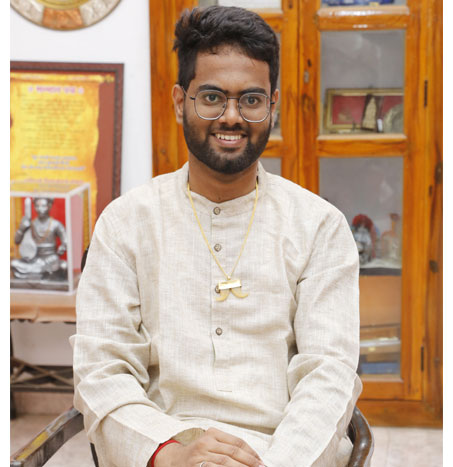 He had completed Museum Conservation Course at Egmore Government Museum, Chennai and a short term course on Marathi and Modi Script at Thanjavur Maharajah Serfoji’s Sarasvati Mahal Library, Thanjavur. He is enthusiastic in learning new things. Further, in Chennai he is a member and volunteer for many Organizations and also attended many workshops, events and won certificates for his best performances. He created a facebook page and a blog to bring awareness to the antiques and heritage monuments in and around Thanjavur. He contributes his collections of old rare photographs of Thanjavur for research and reference and also post articles on the Maratha rulers of Thanjavur to help the young patrons of history who aspire to know about the Thanjavur kingdom. He also takes efforts to improve, develop and promote the richness of his Heritage City 'Thanjavur'.

Like his forefathers, he is also a rasika and a connoisseur of Indian Classical art form Bharatanatyam and Carnatic Music. He enjoys witnessing Tanjore, Pandanallur, Melattur, kalashestra styles of Bharatanatyam. In his second edition book, he has written works and contributions made by his ancestors (Thanjavur maratha kings) in the fields of arts, literature, dance, bharatanatyam and carnatic music etc. He also encourages and motivates artists by honouring and feliciating them and also helps them to get a chance to perform in programs. 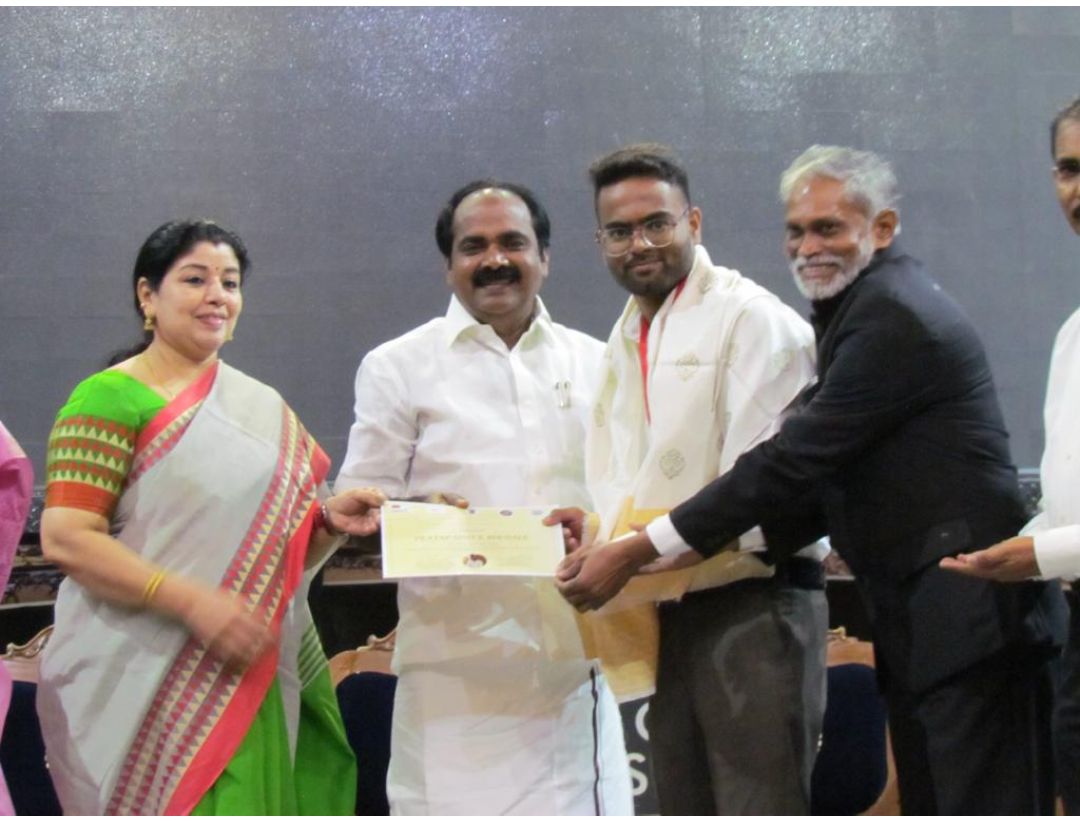 - An Uncommon Prince (The Hindu)

- Royal tales by a Prince (NRI)

-How Thanjavur Maratha cuisine found favour in the south 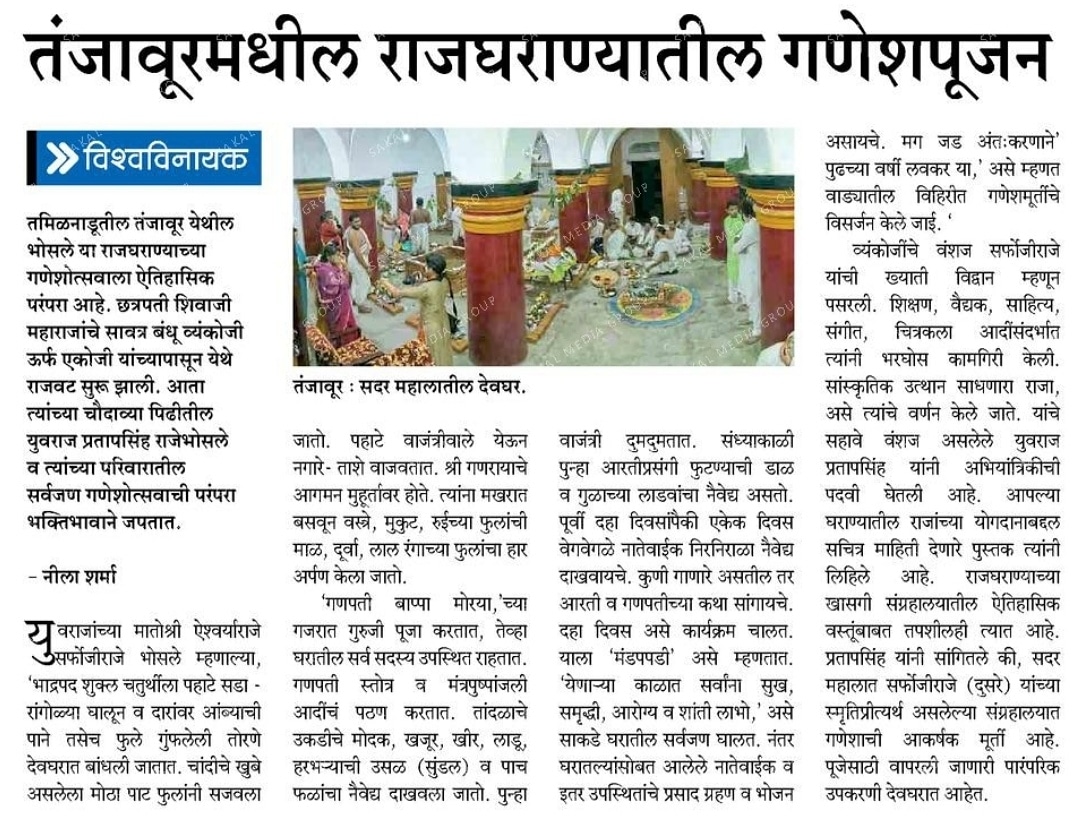 Introduction of Prince Pratap to the audience in a bharatanatyam arangetram program at Aurangabad, Maharashtra. He was invited as chief guest and his introduction speech was given by Dr.Abhiraj Suryavanchi.,M.B.B.S, M.D. 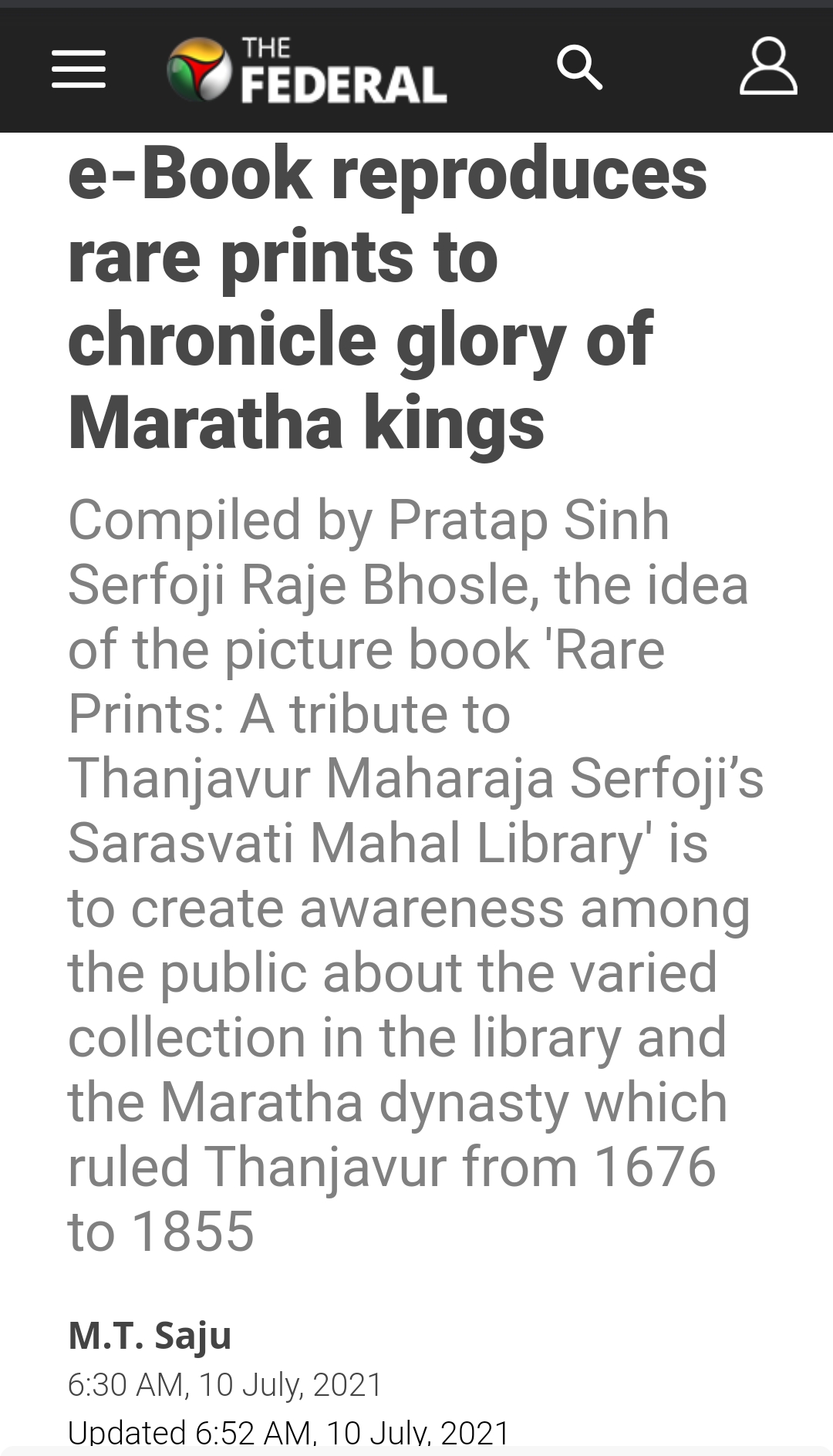 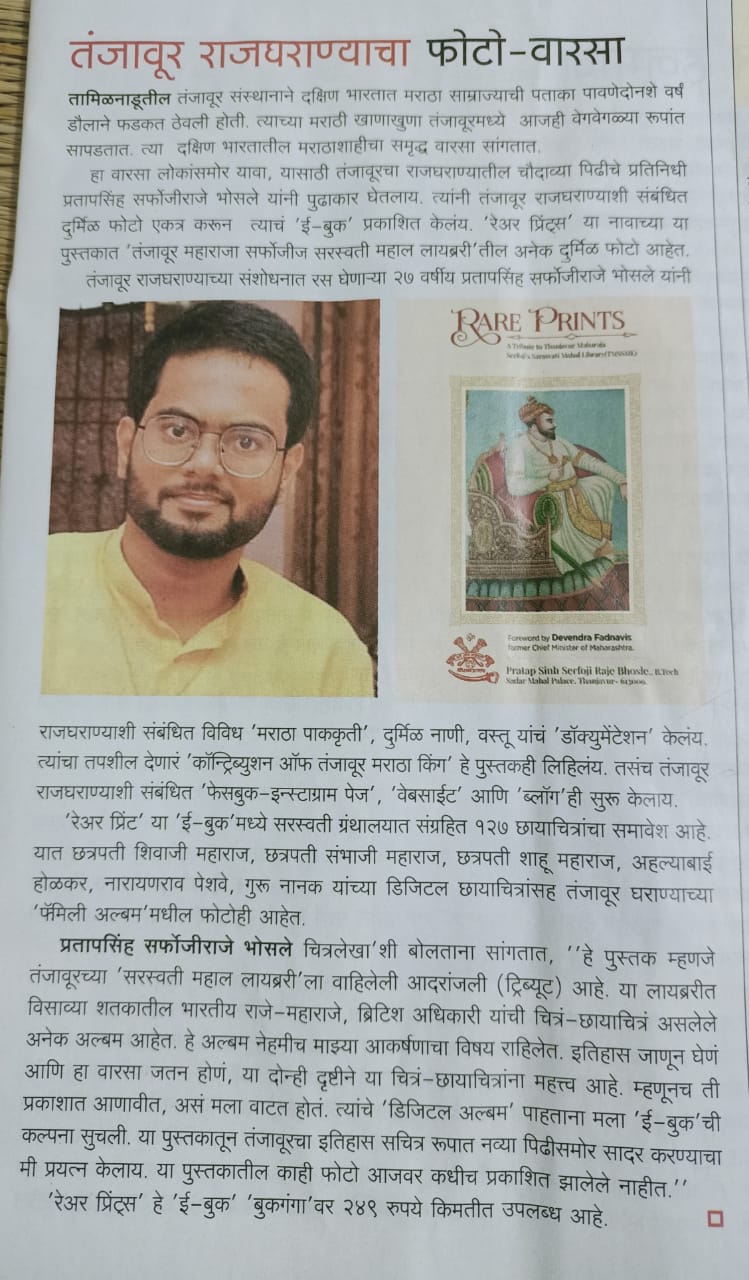 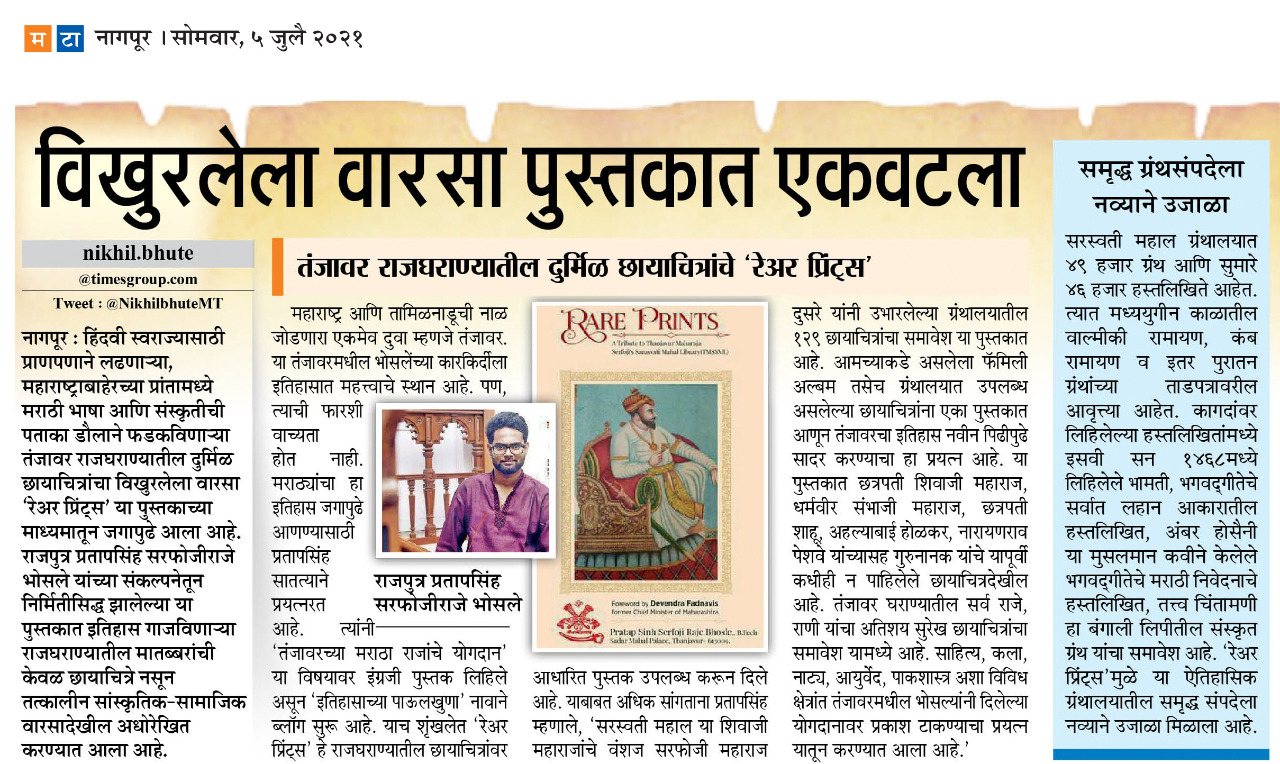 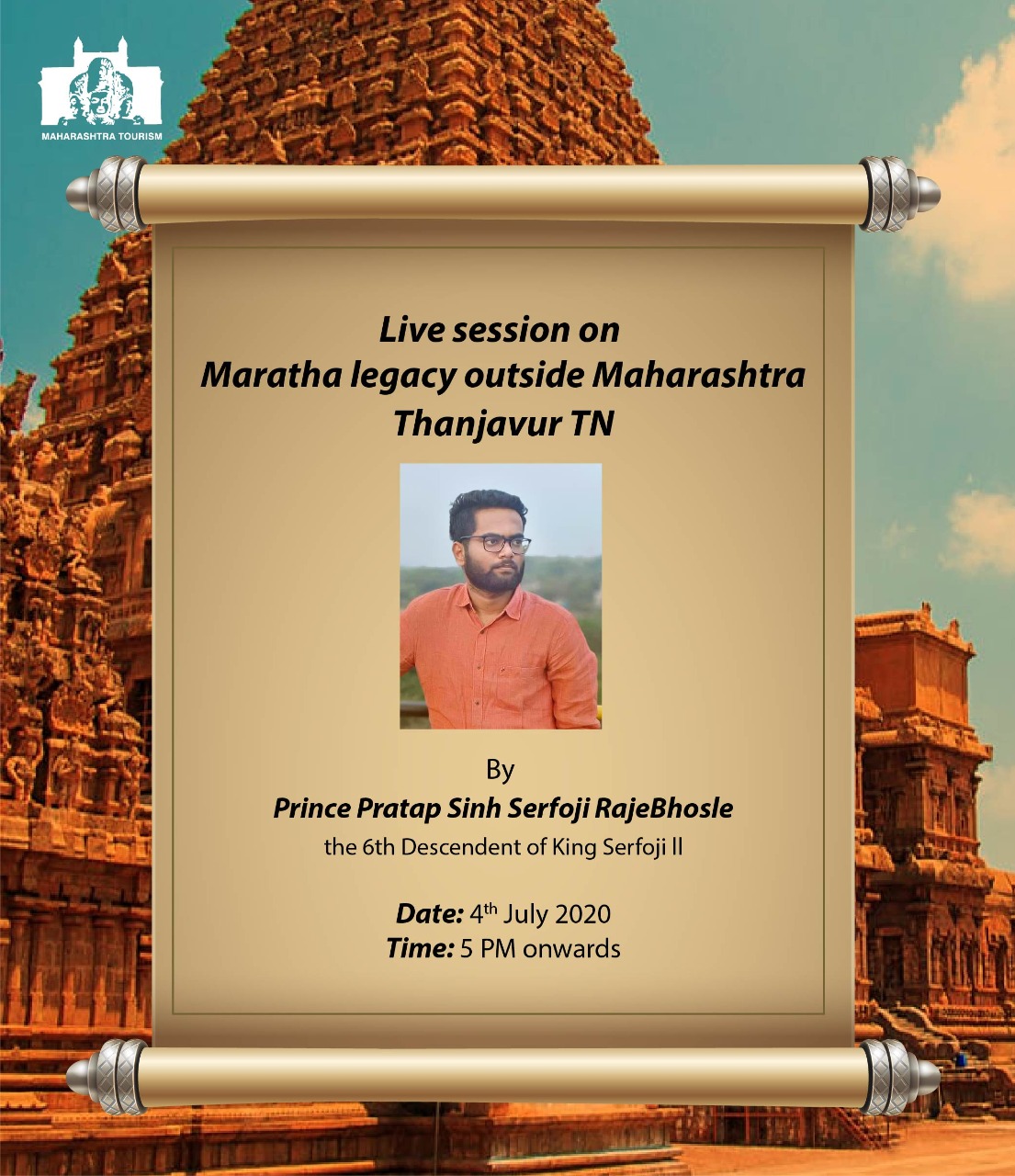 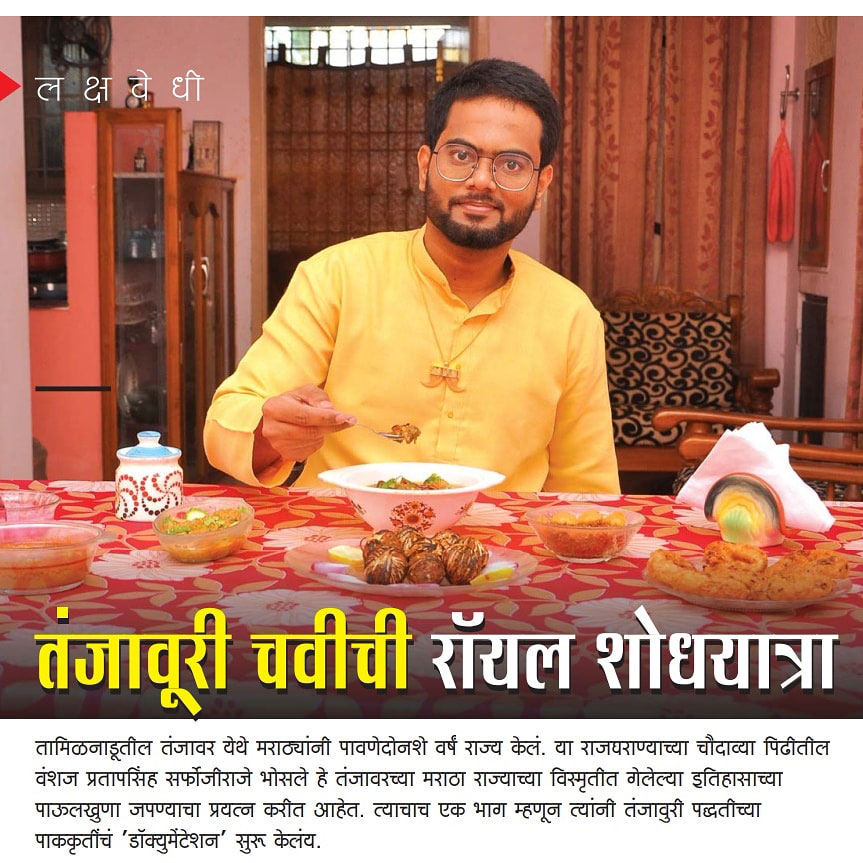 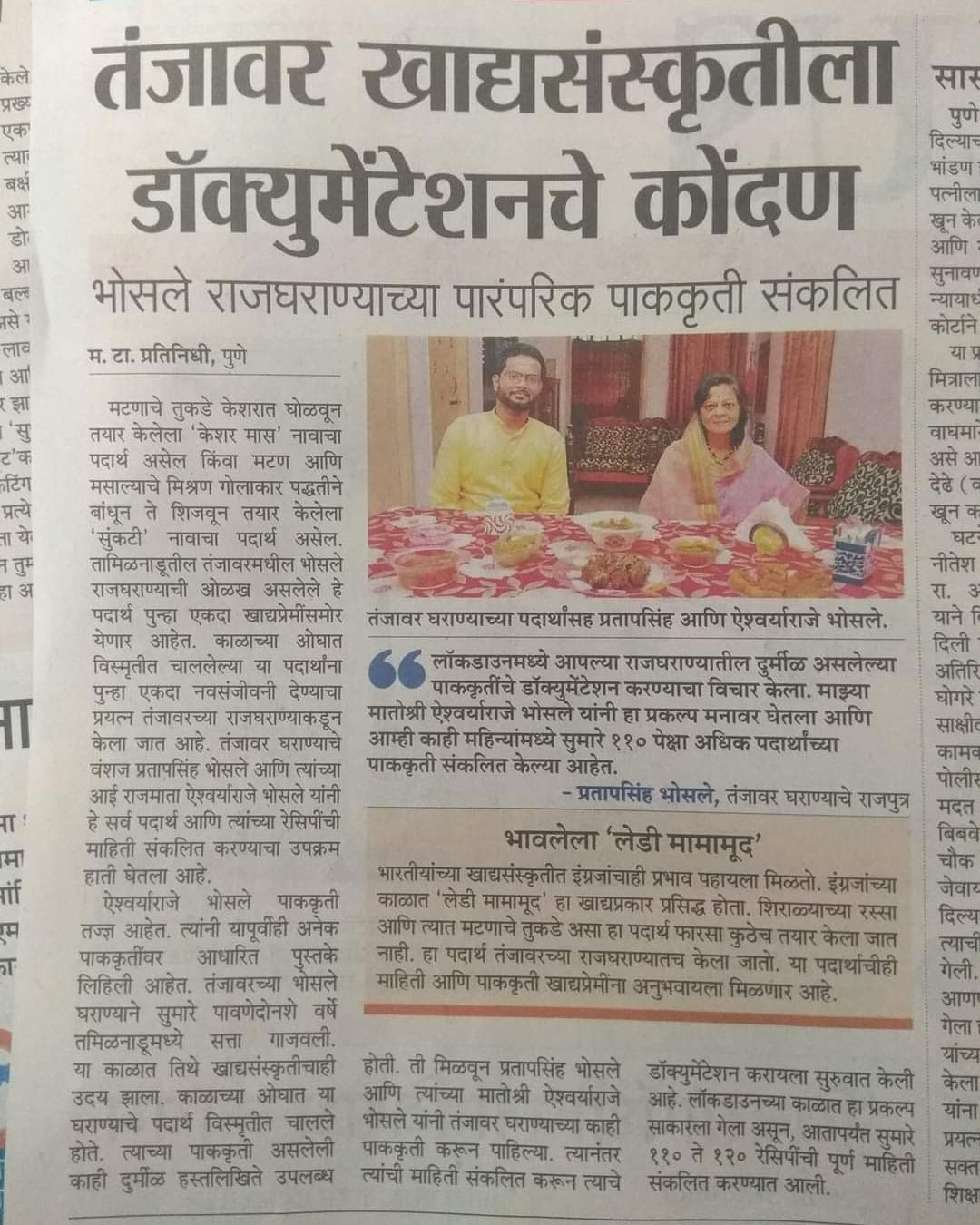 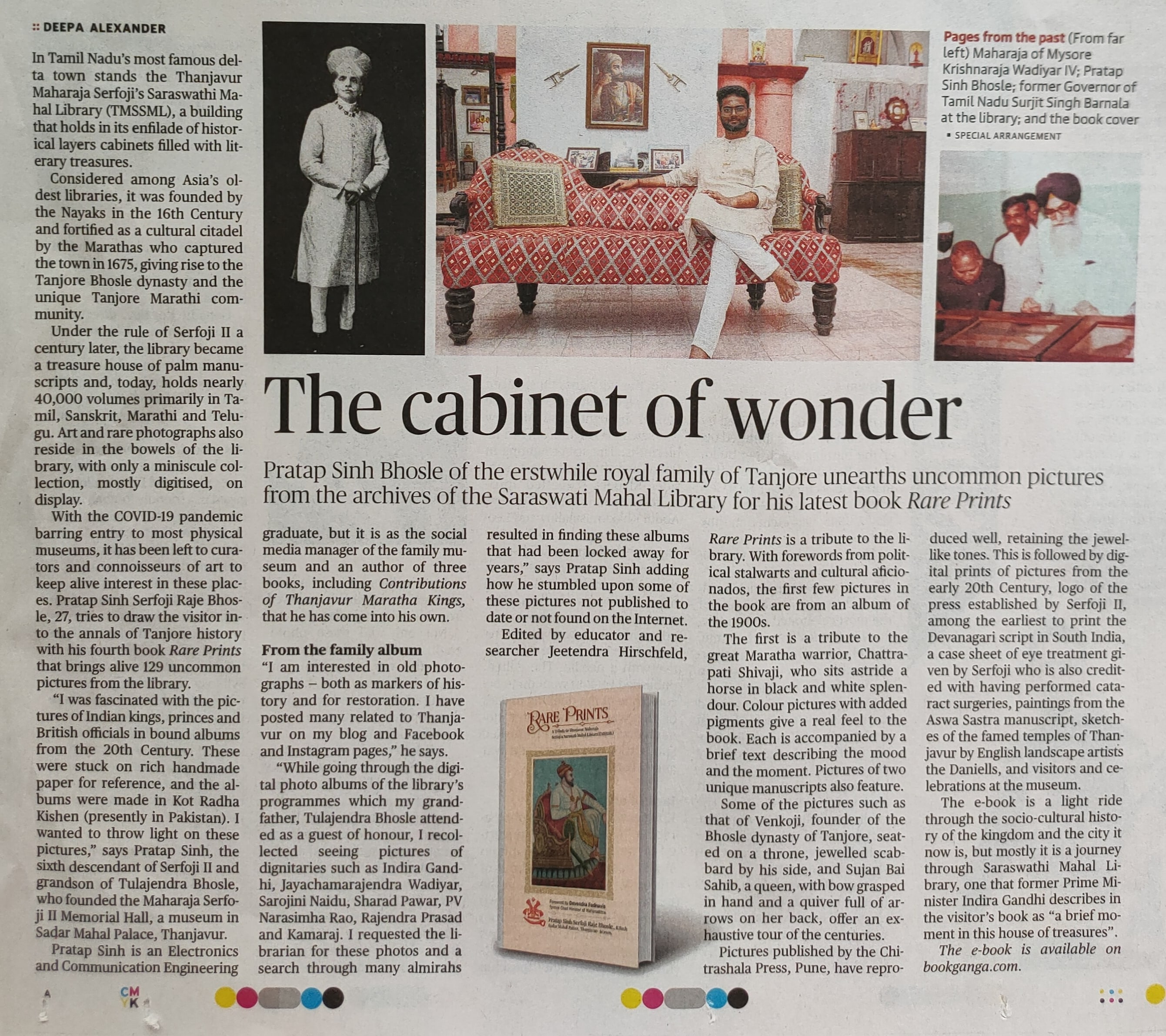 On the auspicious day of Shiv Jayanti (19/2/2022), article written by Prince Pratap on Chhatrapati Shivaji Maharaj's visit to the South (Dakshin Bharath) was published in the Sakal Marathi newspaper, Pune (Maharashtra) edition. 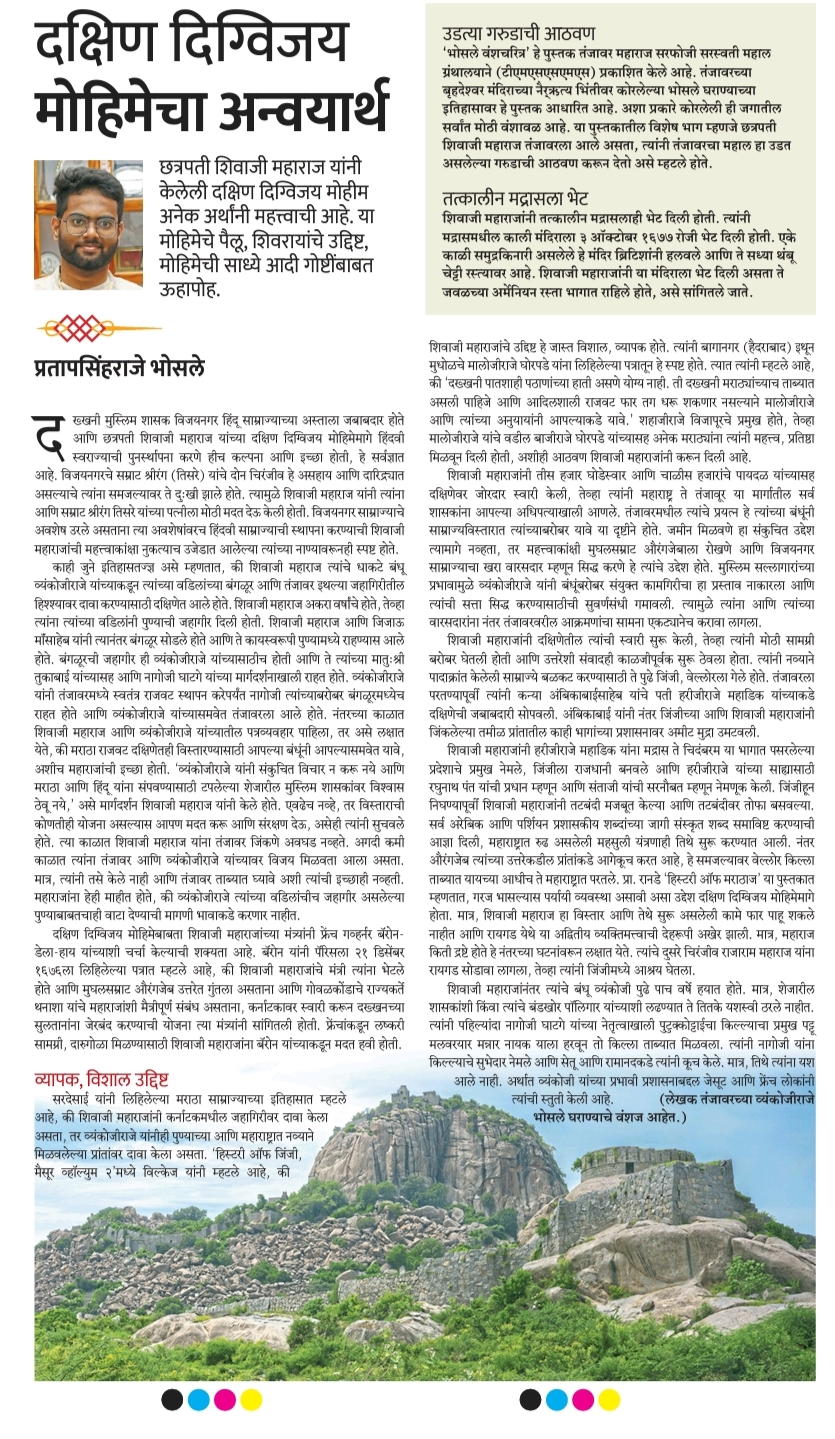 Prince Pratap was invited as chief guest for the Shiv Jayanti and Maharashtra Day celebrations organised by the Maharashtra Association, Chennai on 1/5/2022.