H.H. Cholasimhasanathipathi Srimant Rajasri Maharaja Kshatrapati Sri Venkoji [Ekoji] Raje Saheb Bhosle was the son of King Shahaji I and Tukabai rani saheb. Maharajah Venkoji was the founder of the Maratha rule in Thanjavur.He ruled Thanjavur from 1676-1683 A.D. Venkoji Maharajah was the half brother of Chatrapati Shivaji maharajah. King Venkoji was an adventurous warrior. He entered Thanjavur victoriously on the 12th January 1676 and a couple of months later, he performed his Rajyabhishekam (crowning and annoinment ceremony) on 5th March 1676.After settling down at Thanjavur, king Venkoji devoted his entire attention towards improvement of agriculture and the economic condition of his subjects by providing irrigation facilities, digging and widening of channels and constructing new tanks to obtain better yield. Lands lying follow were brought under cultivation and harvests of the year were usually rich excelling the records of many preceding years.

His brother, Chatrapati Shivaji the great was at the zenith of his power in the north and was keenly ambitious to establish a Maratha hegemony under himself, inclusive of the south. But King Venkoji differed from Chatrapati Shivaji’s view and he thought it would affect his independence. He established order and peace in Thanjavur and made it prosperous by promoting and encouraging agriculture. At the same time he had to fight against hostile powers like Madura and Mysore who wanted to swallow Thanjavur. In spite of all his distractions, he found time to encourage arts and literature. He directed his efforts to consolidate his Kingdom and found a Maratha line of his own. King Venkoji during his rule began to try continuously to win over the people of his recently acquired Kingdom. A Telugu work entitled “karnakalanidhi” attributed to sivarama Kavi, a contemporary of Ekoji deals with the King’s heroism in saving the fort of Trichy from Mysore invaders.Venkoji was praised by Jesuits and French people for his efficient government. He died in the year 1684 and was succeeded by his eldest son, king Shahaji II. 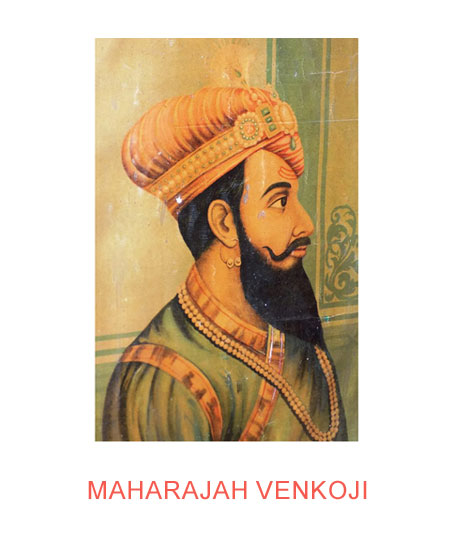