King Tulaja II had no issue to succeed him. He proposed to take an adoption of an eligible boy from his agnatic line and thus his choice fell on Serfoji. Serfoji was the son of Shahaji an agnate whose family was in the protection and patronage of King Tulaja II and his father King Pratap Singh.

The most famous and lasting rule was that of King Serfoji II who ascended the throne in 1798 A.D. By that time the British had veritably ruled most of the India and Thanjavur had to be handed over to the British throne. King Serfoji II was deprived of all power. The revenue and judicial systems were taken over by the East India Company, leaving King Serfoji a mere titular head. King Tulaja II adopted little Serfoji born in the Royal Bhosle family with all the relevant legal procedures before his death. Rev Christian Fredrich Schwartz, a Dutch missionary was appointed as the teacher and guide. He was trained and tutored in St.George school,Madras under the direct supervision of rev Schwartz and in course of time became a scholar. He devoted his life to the pursuit of culture and Thanjavur became renowned as a center for learning.His Sarasvati Mahal Library is endowed with manuscripts, printed books collected from all over the world. This Library is boasted of treatises on Vedanta grammer, music, training of elephants and horses etc. His scientific bent of mind is demonstrated by his collection of various instruments like the air pump, electric machine, an ivory human skeleton etc. Apart from his avid collection of books and manuscripts, He was more than a bibliophile. He established the Dhavantari Mahal where physicians of Allopathy, Ayurveda, Unani and Siddha researched their systems of medicine. He had the important herbs studied and catalogued in the form of exquisite hand paintings.

King Serfoji patronised music, dance and the fine arts. All in all, the Maratha rule in Thanjavur encouraged a golden period before its eventual culmination at the hands of the British. The two hundred years of Maratha rule left behind a rich legacy of art, music and architecture. The aroma of which still lingers within the city structure. He started a school and gave free boarding and lodging facilities.He gave importance to Tamil education and to legible handwriting.He also opened up education to girls.He revolutionised education for the female child by appointing women teachers. He constructed ten water tanks and a number of wells for civic use.He implemented an underground drainage system for the whole of Thanjavur.His printing (Hand) press in Devanagari type established in 1805 A.D was one of the largest and first of its kind in southern India.He also established a stone type press called 'Nava Vidya Kalanidhi Varnayanthra Sala'.He established the 'Dhanvanthri Mahal' a research institute that produced herbal medicine for human consuption and animals.He also established medical dispensaries that functioned at several places.He also maintained veterinary hospitals. He took special care to treat eye ailments. 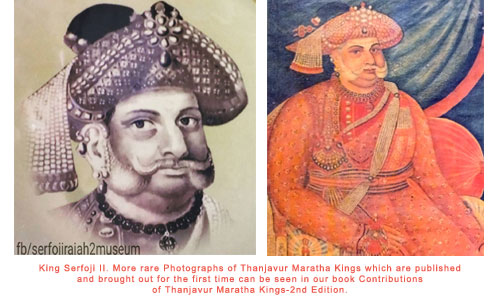 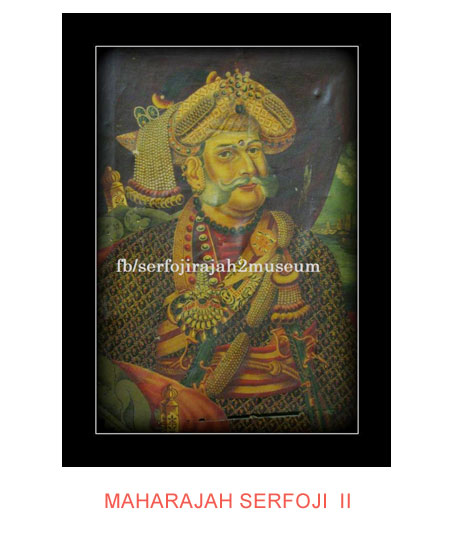 He himself was an expert in treating eye diseases and in performing cataract operations. Sarabendra Vaidya Muraigal a book available at Sarasvati mahal libaray is based on the medical preciptions of Dhanvantri Mahal,the court tamil pandits have written poems on various diseases and treatments,under the orders of the king.

King Serfoji was greatly interested in Science and Technology.He had astronomical instruments for a close study of the stars.He also made them accessible to students of educational institutions that he established. He built ships of various types and sizes to carry out shipping trade with Colombo, Jaffna, Lakshadweep, the Andamans, Kerala and Madras. He also had a gun factory, a naval library and naval store with all kinds of naval instruments like telescope an compass. Detailed account on it can be read in our book 'Contributions of Thanjavur Maratha kings- 2nd edition'. He created the first zoological garden in Tamilnadu, in the Thanjavur Palace premises. He practiced martial arts and patronised chariot racing,hunting and bull fighting. Sarjah Mahal, Sadar Mahal, Manora fort were built by him. He installed lightning rods on top of these buildings and on the tower of the Brihadeshwara Temple.He commissioned artists to paint murals and frescoes on the temple walls and ceiling. As the patron of inscriptions,he had the history of the Bhosle dynasty inscribed on the south western wall of the Brihadeshwara Temple. It is considered as the largest inscription in the world. He renovated and nurtured many temples built by kings of other dynasties. In particular, he renovated Brihadeshwara temple raised by king Raja Raja Cholan. He also built new temples, like the Vittoba temple, Manikarneekeshwara temple and the Kasi Vishwanathar temple in Thanjavur.He performed a tour to 86 sacred places in the Chola Kingdom and a holy pilgrimage to Kasi. During his pilgrimage, he camped at several places and performed religious rites, giving away gifts and renovating holy places. He liberally funded the construction of churches and schools run by Christians. Likewise, he continued the endowments to muslims initiated by his forefathers. He sent chadra and fatiah materials to Nagore Dargah, which had traditionally received the munificence of his forefathers for prayers during the annual Khandhoori festival. He was also the patron of the Thanjavur Bade Hussein Dargha. He authored many literary works. He encouraged folk art forms, such as Kuravanji dance drama and authored a book called 'Devendra Kuravanji'. He also established a band troupe in the palace and introduced western musical instruments like clarinet and violin in the court. He was a patron of artists and artisans. He was a polymath and polyglot savant. He was one among the four honorary members of the Royal Asiatic Society. He gifted vast tracts of lands to several eminent musicians, poets and scholars of different languages and subjects. A visiting missionary the Rev.Bishop Heber, rightly observes,"I have seen many crowned heads, but not one whose deportment was more princely". King Serfoji was so deeply loved by his subjects that nearly 90,000 people participated in his funeral procession on March 8th 1832.

Click the below link to read the 20 Rare facts of King Serfoji II in the field of Dance and Music.

RAJAH SERFOJI GAVE GREAT IMPORTANCE TO THE CHATRAMS, ENDOWMENTS AND INSTITUTIONS AS COULD BE SEEN FROM THE FOLLOWING EXTRACTS FROM A LETTER WRITTEN ON 28TH JANUARY 1801 BY RAJAH SERFOJI TO THE BRITISH RESIDENT OF THANJAVUR, WHICH IS PRESERVED IN HIS LIBRARY AT THANJAVUR.IT READS THUS:

“Although these charitable institutions did not orginate with me,I considered these as attached by my house and essential to my reputation and happiness. The Thanjavur country is celebrated over all the world for its charities and it is called dharma rajyam,and I consider the reputation which reverts upon me through all countries from this application as the most honourable distinction of my work. The reverences appropriated to the support of these charities by my ancestors and my father tulaja Rajah,have never been included in the public revenue of the country.they invariably cherished and supported the charities,it is my earnest wish to do so. Though named after the ladies of the Palace,the chatrams were always under the direct management of the reigning Rajah”.