After the death of King Serfoji II, his son King Shivaji II came to the throne. His coronation ceremony was held on April 18th 1832. He was a scholar and a linguist. He knew Marathi, Sanskrit,Telugu and Tamil languages. King Shivaji II authored a Marathi drama “Natesa Vilasa” the drama is hailed as an excellent piece of Marathi literature based on ancient Sanskrit type of dramas or natakas. His court was also adorned with notable scholars and Pandits. Music and Bharatanatyam gained further popularity. To mention a few poets and scholars will be much sufficient to show the patronage to fine arts and literature, he wrote several Padas (devotional songs) in Marathi under the pen name “Dhakte Diwan” or younger Diwan. It was in his time Tamil was greatly encouraged and several dramas and kavyas were produced by eminent Tamil scholars. We can safely assure it was also in his period, the integrations of the Marathi culture and literature, with that of Tamil and to a certain extent Telugu took place. The seed for the synthesis and a new product was thus with the active royal patronage.Like his father, he too collected a large number of manuscripts on several Sastras in several languages. He also collected a number of English books and purchased many books from England through his European friends. A good number of steel engraving pictures and illustrated books on English were got from England and expenses incurred in connection with its purchase can still be seen in Modi records. He contributed to several foreign journals and native periodicals like Deshabimani in Tamil.He is said to have acquired the habit of reading science and history books in English.Like his father he endowed several Charitable institutions and built huge Chatram known as ‘Shriyas Chatram’ in the city of Thanjavur. He built a Temple at Bondripalayam and installed the idol of goddess Durga. 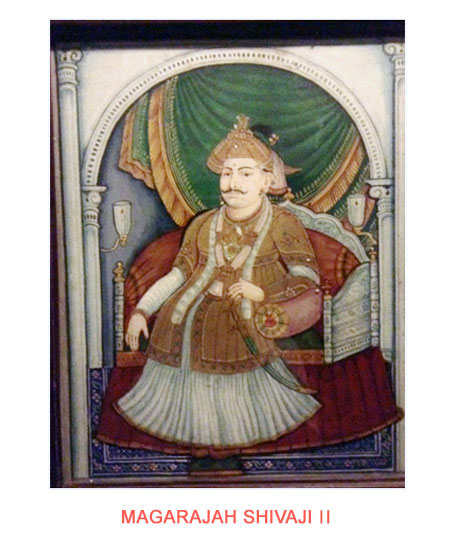 He continued the noble work of his father and enriched the legacy left behind by his illustrious predecessors. There are many compositions in Sarasvati Mahal Library, Thanjavur, comprising varnams, svarajatis, salam daru and tillanas in praise of King Shivaji II. The Thanjavur Quartet (Chinnaiya, Ponnaiya, Vadivelu and Sivanandam) were his favorite court vidwans and they composed many dance compositions with King Shivaji II as the Kriti Nayaka. Tamil dramas such as Pandikeli Vilasa Natakam by Narayana Kavi, Madana Sundara Prasadana Santana Vilasa by Arunachala Kavi, Bharata Ammanai by Krsnan were produced during his reign. King Shivaji II encouraged Tamil and Telugu. Sivanandam, one of the Thanjavur Quartet, was the author of padams in Tamil, javalis, tana varnams, chouka varnams, sabdams and addressed them to King Shivaji II’s patron. The Padavarna in Todi raga and rupaka tala with the sahitya “Danike tagu…” which is still the masterpiece in Bharatanatyam recitals has an exquisite musical setting.

The manuscript entitled Shivaji Sisamulu describes the talents and accomplishments of King Shivaji II. Shivaji was a lover of lavanis and had extended his patronage to that style of Marathi folk song also. He himself formed the theme of a few lavanis. Lavani Venkata Rao was a prominent lavani singer of his court and was the composer of a lavani in praise of the king. Shivaji was himself a ‘Savayi’ and acted as the final judge in lavani contests held in the court. The Ragamalika lavani in Saveri, Sri Kannada and Punnagavarali ragas is dedicated to King Shivaji II. He was very liberal in his gifts and sarvamanya.

To play on the different instruments in the natya and sangita salas, performers were appointed and the salary or emoluments paid to them are recorded in the state documents. Even frequent concerts of western music and performances of Hindustani music and dance were held in his court. There is evidence to prove the existence of a regular galaxy of musicians, dancers, court poets and actors in the royal establishment and it was during this period, the best elements in western and Hindustani music were slowly absorbed into the texture of Carnatic music. Dancing girls, dance masters, musicians, vocalists were patronized, encouraged and gifted lavishly by King Shivaji II like his forefathers. He ruled Thanjavur till 1855 AD.

Like his father he performed a Kumbabisekam to Brihadeshwara Temple in the year 1842 (vide inscription on the pinnacle of the Temple tower and modi records). Rajah Shivaji finding himself without a heir in spite of multiple marriages, decided to adopt one of his nephews (his sister’s son).He choosed Rajaram Ingle the son of Serfoji II’s daughter Sakwar baisaheb married to Pratap Rudra Mane Ingle. Rajaram Ingle was named as Rajah Serfoji III. 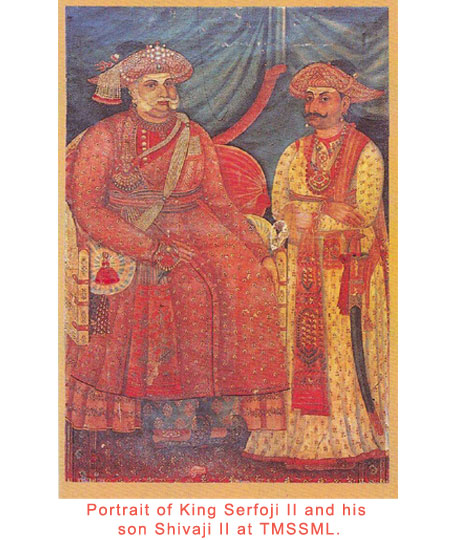