The Pride of Thanjavur.

Sarasvati Mahal library is located in Thanjavur, Tamil Nadu, India. It is one of the oldest libraries in Asia, and has on display a rare collection of Palm leaf manuscripts and paper written in Tamil, Hindi, English, Telugu, Marathi, and in few other languages indigenous to India. The collection comprises well over 60,000 volumes, though only a tiny fraction of these are on display.

The Sarasvati Mahal Library started as a Royal Library for the private pleasure of the Maratha King of Thanjavur. Most notable among the Maratha Kings was Serfoji II (1798–1832), who was an eminent scholar in many branches of learning and the arts. In his early age Serfoji studied under the influence of the Dutch Reverend Schwartz, and learned many languages including English, French, Italian and Latin. He enthusiastically took special interest in the enrichment of the Library, employing many Pandits to collect, buy and copy a vast number of works from all renowned Centres of Sanskrit learning in Northern India and other far-flung areas. 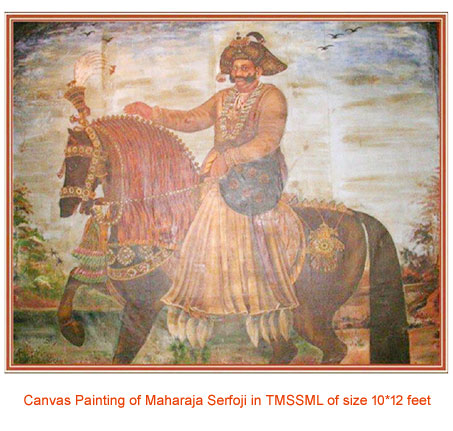 The bulk of the manuscripts (39,300) are in Sanskrit, written in scripts such as Grantha, Devanagari, Nandinagari, Telugu. Tamil manuscripts number over 3500, comprising titles in literature, music and medicine. The Library has a collection of 3076 Marathi manuscripts from the South Indian Maharastrian of the 17th, 18th, and 19th centuries; this includes the hierarchy of the Saints of Maharashtra belonging to Sri Ramadasi and Dattatreya Mutts. The Marathi manuscripts are mostly on paper but a few were written in Telugu script on palm-leaf. There are 846 Telugu manuscripts in the holdings, mostly on palm leaf. There are 22 Persian and Urdu manuscripts mostly of 19th century also within the collection. 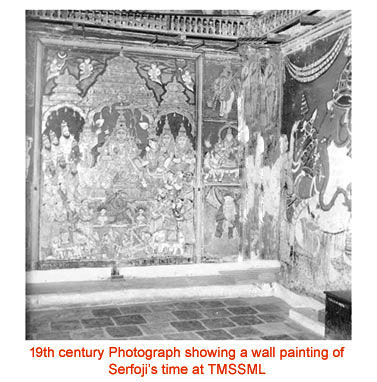 Apart from these manuscripts there are 1342 bundles of Maratha Raj records available at the Library. The Raj records were written in the Modi script (fast script for Devanagari) of the Marathi language. These records encompass the information of the political, cultural and social administration of the Maratha Kings of Thanjavur.

Some of the rare books and manuscripts:

- The Madras Alamnac printed in 1807.
- Lavoisier's Traité Élémentaire de Chimie ("Elements of Chemistry").
- The notes of Bishop Heber on Raja Serfoji II.
- The correspondence letters of William Torin of London who purchased a lot of books for Raja Serfoji II and the Sarasvati Mahal Library.
- The Globe used by the Raja.
- Ancient maps of the world.
- Town planning documents of Thanjavur including the underground drainage system, the fresh water supply ducting system.
- Pictorial charts of the theory of evolution of man as evinced by Charles Le Brun.

Books on Travels and Voyages give historical facts and records of that period. This Library has many books on travels. Robert Perivale’s book “An account of the Island of Ceylon” Containing its History, Geography, Natural History, with the manners and Customs of its various Inhabitants. George, Viscount Valentia’s Voyages and Travels to India Ceylon, the Red Sea, Abyssinia and Egypt in the years 1802 to 1806 gives historical accounts of various places and status of administration. We could know the Tanjore Palace description from this book. Some other books give historical facts on India are:

- The Travels of Ibn Batuta,2vols tr by Lee Samuel B. D, London, 1829
- A Voyage in the Indian Ocean and to Bengal 2 v. by Grnadpre,L.D, London,1803
- Travels from England to India 2 v. of Major John Taylor, London, 1799
- Army during the Mahratha War of 1817-1819 by Blacker Valentine, London,1821
- Memoirs of the operations of the British Army in India during 1817-1819
- A Narrative of the Campaign in India by Dirom , London,1793
- The History of Hindustan, 2v by Dow Alexander, London, 1770
- A History of Hindustan from the death of Akbar to the reign of Aurangazib
- A View of the Taj Mahal at the city of Agra, London,1798
- Journals of the Sieges of the Madras Army in 1817-19 by Lake Edward, London, 1825.
- Consideration of the policy of renewing exclusive privileges of East India company,1812
- History o the Religious institutions founded by British in Calcutta, Lushington Charles,1824
- Sketch of political History of India from Pitts Bill 1784 to the present date 1811
- Indian Antiquities or the history of Hindustan, 7 v, Marsh Herbert,1794
- History of British India, 6v,Mill James, London,1826
- A Narrative of the Mahratta Army by Moor Edward
- A History of the Military transactions of the British Nation in Industan 2v by Robert Orme,London,1798 etc.,

The Atlases and Maps collected by the Raja Serfoji are extraordinary important, which are preserved in the Library. These Maps dealt with ancient History, Geographical details, Sea routes, Political divisions and their boundaries. The Maps were made with the compilation of land survey. In the Maps printed in 18th and 19th century, we can see the name of India as “Hindoostan” or the Mogul Empire” Australia as New Holland, Japan as Nippon etc.

- Map of the Dominions of Mysoor at the death of Chick Deo Raj Wadeyar in 1704 by Lieut Co. Mackenzie, London, Longman, 1810
- Sketch showing the different roads through the Peninsula of India under the presidency of Fort St. George.
- Map Illustrative of the History of the life and times of Hyder Ally Khan and his descendants; exhibiting the utmost extent of the Mysore dominions under that family and the principal places connected with the transactions of that period to 1799. This map laid down from the late surveyor of Mysore liet. Col. Wilks.

A notable and interesting pictorial book available in the Library is "Human Physiognomy pictures". It is a series of Lithographic drawings by Charles-Le-Brun, a noted French Artist, it is a Illustrative drawing of relation between human face with beast and birds face. Another 48 pictures of Oriental scenarios of Hindoostan by Daniel brothers are also available in the Library.

Besides books and manuscripts, this Library possesses beautifully decorated Thanjavur style paintings on wood, canvas, glass and about five thousand folios of illustrated paper paintings such as Gaja Sastra, Aswa Sastra, Mythological pictures, botanical specimen paintings, military costumes, Chitra Ramayana etc., The Library also has a rich collections of miniature manuscripts, miniature paintings and manuscripts of micrographic writings. One such manuscript is Shivaprapancharatna stotram. Each letter in this work is made up of the microscopic term ‘ShivaShiva’. It feature is an excellent calligraphy.

A Museum is located in the Library building to reveal the importance of the Library to the Public. This Museum is small but organised into sections highlighting ancient Manuscripts, Illustrated Manuscripts, Printed copies of the Original Drawings, Atlases, Thanjavur- style Paper Paintings, Canvas Paintings, Wooden Paintings, Glass paintings, Portraits of the Thanjavur Maratha Kings, and the Physiognomy charts of Charles Le-Brun. These materials give an idea of the total variety in the vast collection within the Library. Prince Shrimant Tulajendra Rajah Bhosle also donated many old antique things which were used by Maharajahs in ancient days to the museum.

The SARASVATI MAHAL LIBRARY is situated within the campus of the Thanjavur Palace. Visitors can have a glimpse of preserved books and can sit and read in the Library premises. 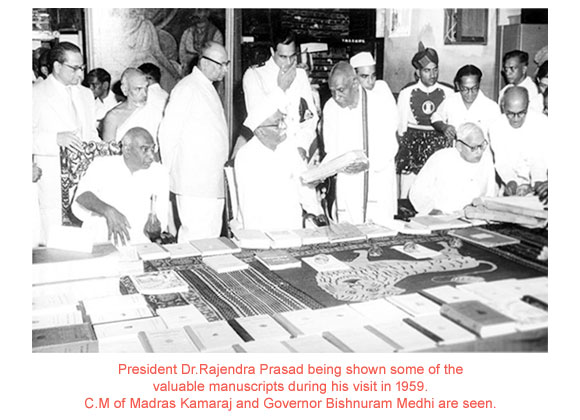 “It is indeed tantalising to be able to spend only a brief while in this house of treasures and to have only a fleeting glimpse of manuscripts which invite hours and even days of leisurely examination. Even so, this visit has been a rewarding and an enriching experience. I sincerely hope it will soon be possible to provide better care for these priceless manuscripts and to arrange for them to be micro graphed."

"The Library contains rare volumes which are of inestimable value. It constitutes one of the glories of the Nayak and Maratha rule".

"This is in many ways the most impressive Library i have seen in many years. Its collections dramatically illustrate and highlight the rich old culture of India and, particularly, south India. It is a great tribute to the devoted staff who maintained it"

"I had the opportunity of paying a visit to the Library and I am greatly impressed with the valuable work that is being done. The subject of work is so vast and important that I feel that more support and encouragement should be given to the useful work that is being done. I saw a number of Palmleaf manuscripts stored in almirahs, which have not yet been touched are translated, the obvious reason being want of funds. I am very much distressed to hear of this. Old and ancient manuscripts on cudgeon leaves would be lost by age and unless reproduced in print are likely to fall to bits. More space and more finance would achieve useful results. I need not stress more on the benign Madras government and other enlightened bodies who are interested in preserving and furthering knowledge"

"Visited this famous Library today. Enlightened rulers have done a great service to the cause of learning by these collections".

"A most interesting collection; the illuminated manuscripts are especially interesting. There is material here for life time's research and more".

"I had the pleasure of visiting the Sarasvati Mahal Library this morning and I was struck at the wonderful and interesting manuscript collections of some of our ancient works in several languages displayed there. These rare literary works, I was happy to find, were carefully preserved and well arranged and maintained, and the premises are kept very neat and clean. Those who are in charge of Library seem to take keen interest in looking after these valuable collections of manuscripts and I am quite sure the Library will prove very useful in the persuit of research work also in our ancient literature.
The late Serfoji Maharaja appears to have been a great patron of art and learning and it is the duty of everyone to preserve the rich and ancient heritage".